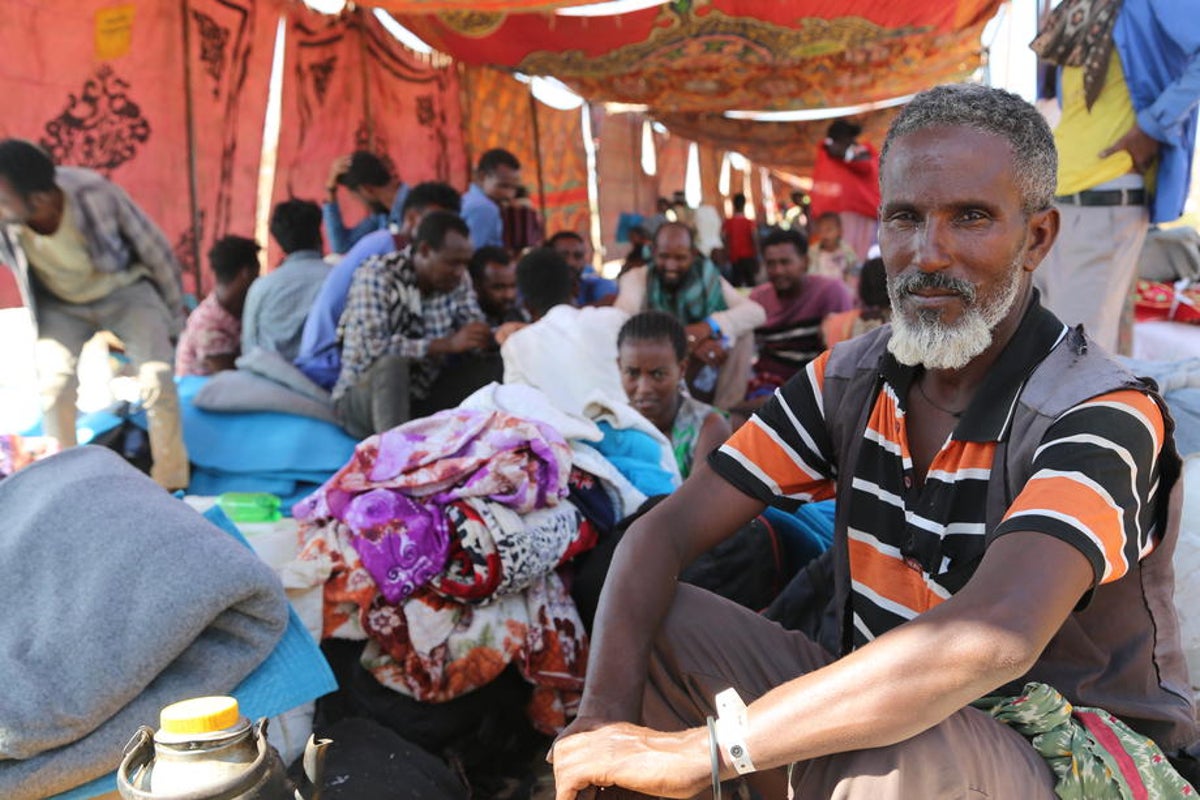 Conflict will hit the most vulnerable the hardest, and they cannot afford to be neglected. Help us support families in Ethiopia and around the world.

“Since 3 November 2020, a series of escalating clashes between the Ethiopian Federal Government and the Tigray Regional Government has resulted in a growing humanitarian emergency including heavy casualties and population movements both internally and cross border. An estimated 9 million people within or near the Tigray region are at risk due to increasing confrontations” (IFRC, 20 Nov 2020). The Tigray Region, with a population of approximately 5 million, was already host to approximately 600,000 people dependent on relief assistance before the crisis, including 400,000 food insecure, 100,000 IDPs, and nearly 96,000 refugees, and nearly 16,000 returned migrants (OCHA Ethiopia, 7 Nov 2020).

Communications have been cut off creating an information blackout in Ethiopia. After two weeks of conflict, reports from the region of larger numbers of internally displaced are growing daily. Lack of access to people in need and the inability to move in goods to the region are making it very difficult to provide humanitarian assistance.

The numbers of refugees seeking safety in Sudan are increasing with over 4,000 crossing the border per day. Since the violence began, more than 40,000 children, women and men have fled into Sudan in search of safety, overwhelming the capacity to provide aid. As of 21 November 2020, Sudanese government and United nations have registered over 40,277 Ethiopian refugees in Kassala, Gedaref, and Blue Nile states. “Refugees told us [UNHCR] that they were suddenly startled by the fighting. We have met teachers, healthcare workers, office workers, farmers and students who were overcome by the violence. Most of them only flee with what they were carrying at the time. Thus they embarked on a long journey on foot in search of safety in Sudan” (UNHCR, 20 Nov 2020). Efforts by the international and regional community (including IGAD, UN and EU) to end the crisis have failed. Under-Secretary-General for Humanitarian Affairs and Emergency Relief Coordinator told the UN Security Council that, attempts by the UN to convince Ethiopia government to let aid agencies reach needy people in Tigray region have failed and blocking aid violates the laws of war (UN, 17 Nov 2020).

Due to the on-going military operations, a six-month State of Emergency was declared in the Tigray region. The longer the Ethiopia government refuses to let aid flow into the Tigray region to help millions of civilians as the conflict intensifies, the more likely that UN Refugees’ prediction of at least 200,000 people fleeing to Sudan will come true. Therefore, Sudan and humanitarian actors must be prepared for the worst-case scenario and a large influx of refugees into Sudan, Eritrea, and Djibouti, and other countries in the Horn of Africa.

Scale of internal displacement remains unknown due to severe access constraints. Information regarding the Eritrean refugees in the region is not available. There is lack of information regarding sectoral needs of people affected in both Sudan and Tigray region. UN reports that half of the people fleeing into neighbouring Sudan are children. There were unconfirmed reports that some people had fled to Djibouti and Eritrea.

Crisis Impact
Tigray’s situation continues to have a spill-over on the humanitarian responses in Sudan. UNHCR is warning that a fullscale humanitarian crisis is unfolding as thousands of refugees flee on-going fighting in Ethiopia’s Tigray region (OCHA Ethiopia, 20 Nov 2020). The numbers of refugees seeking safety in Sudan are increasing with over 4,000 crossing the border per day, and this is a real disaster and burden on the already deteriorating situation in Sudan. Thousands of people have been displaced insdie Tigray region and border areas, and also about more than 40,000 refugees have already fled to Sudan.

On 15 November, the Government of Sudan reported the arrival of 24,944 refugees in Gedaref and Kassala States as a result of the on-going war in Tigray (SUNA, 15 Nov 2020). As of 21 November 2020, UNHCR and Sudanese Commissioner for Refugees have registered over 40,277 Ethiopian refugees in Kassala, Gedaref, and Blue Nile states. According to the Tigray authorities, “100,000 people have been displaced, and the United Nations has warned that an additional 1.1 million people may need aid. No official figures of the number of people who’ve been killed are available” (Bloomberg, 20 Nov 2020).

On 9 November, dozens of civilians have been killed in Moya Khadra in South West Zone of Tigray region. People who saw the dead bodies told Amnesty International that they had gaping wounds that appear to have been inflicted by sharp weapons such as knives and machetes. “We have confirmed the massacre of a very large number of civilians, who appear to have been day labourers in no way involved in the ongoing military offensive. This is a horrific tragedy whose true extent only time will tell as communication in Tigray remains shut down,” said Deprose Muchena, Amnesty International’s Director for East and Southern Africa (Amnesty International, 12 Nov 2020).

Civilians fleeing fighting described bombing by government jets, shooting on the streets and killings by machete, as they joined thousands of refugees crossing into neighbouring Sudan. Barhat, 52, said she and others had fled from Moya Khadra after people from the Amhara region, which borders Tigray and whose rulers back Prime Minister, attacked them. “They killed anyone who said they were Tigrayan. They stole our money, our cattle, and our crops from our homes and we ran with just the clothing on our backs” she said (Reuters, 13 Nov 2020).

Refugees sleep outside shops or on the side of the roads at night. The main humanitarian needs for refugees identified include provision of emergency shelter and Non-Food Items (NFIs), food and water, and healthcare, and also relocation to safe areas away from soldiers and fighting areas. Humanitarian assistance is expected to be needed for at least the next 6 months. The Government of Sudan, UN agencies and humanitarian agencies are on the ground and doing what they can to respond, but not enough.

Eritrean Refugees in Ethiopia and Sudan

Tigray and Afar Regions
The number of people displaced in Ethiopia is growing by the day. Lack of access to these refugees and displaced persons, coupled with barriers to bringing relief supplies into the region, remains a major concern. There are around 100,000 Eritrean refugees in four different camps in the Tigray region who are caught in the fighting between the federal government and the Tigray region.

Table 1: Population of Concern to the UNHCR and OCHA in Ethiopia

“Amidst continued fighting in the region, the situation of tens of thousands of Eritrean refugees in the Tigray region is of particular concern. Eritrean refugees in Tigray are completely dependent on aid, and the conflict will have major consequences for the relief efforts in the camps because the supplies that have been supplied are enough until the end of November” (UNHCR, 21 Nov 2020). According Aljazeera, “Eritrean refugees face threats of violence, harassment and food shortages amid conflict in the Tigray region (Aljazeera, 21 Nov 2020).

Table 2: Eritrean Refugee Camps in Tigray region as of October 2020

There are already more than 120,000 Eritrean refugees in protracted refugee status in Sudan, mostly in the Khartoum and camps in Kassala State. Eritrean refugees have been living in East Sudan since the 1960s, with 55% of camp-based refugees born in Sudan. Therefore, there are here to stay.

The majority of the refugees are Muslims and speak Arabic. The refugees face similar challenges to the host community, such as harsh environmental conditions and limited opportunities to establish meaningful self-reliance.

As tensions escalate, thousands of people are expected to cross the border into Sudan and also the Afar and Amhara regions in Ethiopia. Our partner is working at the entry points and Um Rakuba camp in Eastern Sudan to help accommodate the large influx of refugees streaming into the country. We are also continuously monitoring the situation and closely tracking the outflow of civilians to neighbouring regions and countries.

The primary needs reported by the Government of Sudan and humanitarian partners include emergency shelter and Non-Food Items (NFIs), food and water, and healthcare. Kebire Trust in partnership and contribution collaboration with other organizations would like to address critical needs of the refugees in kassala State. The purpose of this intervention is to preserve lives and alleviate the suffering of the displaced populations affected by the conflict in Tigary region of Ethiopia. Due to high needs and resource limitation, as well as capacity and logistic factors, Kebire Trust will target 250 households (approximately 1,500 individuals) of the refugee population in Kassala State.

The proposed interventions include food aid, emergency shelter and Non-Food Items (NFIs) to the most vulnerable groups in the entry points and Um Rakuba camp. Therefore, your donation, contribution, and support are crucial to helping us reach those who need it most. Should you require information about the humanitarian situation in Ethiopia as well as the Tigray crisis and influx of the refugees into Sudan, please do not hesitate to contact us..